US equity futures edged up and Asian stocks were mixed Wednesday after markets dipped overnight on a technology selloff and Treasury Secretary Janet Yellen’s comments on interest rates. The dollar held gains.

Yellen said rates will likely rise as government spending ramps up and the economy responds with faster growth — comments that economists regarded as self-evident. In a subsequent interview, the former Federal Reserve Chair said she wasn’t predicting or recommending rate hikes.

Commodities reached their highest levels in almost a decade as the rebound from the pandemic fuels demand. Copper traded around $10 000 a ton and oil topped $66 a barrel. New Zealand’s dollar outperformed all its Group-of-10 peers on a strong jobs report. Benchmark 10-year Treasury yields inched up. 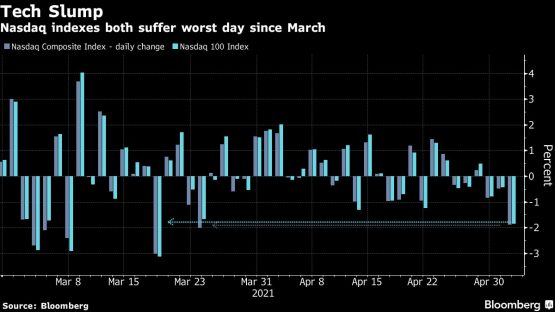 The debate on whether government spending could spur excessive inflation comes as stock valuations hover near the highest levels in two decades. Investors have been reluctant to push rallies further despite robust corporate earnings. While the Fed has assured markets that interest rates will remain at current lows throughout the recovery, strengthening data have raised concerns that policy makers may move to tighten sooner than anticipated.

“The market’s focus will still be on growth restoration and how Covid develops over time,” said Cecilia Chan, HSBC Asset Management Asia-Pacific chief investment officer, on Bloomberg Television. She downplayed concerns about inflation and added that “the central bank will remain dovish.”

Meanwhile, India continues to face a devastating Covid-19 wave. The nation’s stocks and bonds gained after the central bank approved 500 billion rupees ($6.8 billion) of liquidity to banks to support lending to vaccine makers, hospitals and providers of health services.

Here are some key events to watch this week:

These are some of the main moves in markets:

Remainder of IPL 2021 to be held in the UAE in Sep-Oct, says BCCI