The Nasa Ingenuity helicopter has flown across the surface of Mars for the first time.

This is the tiny helicopter’s second flight, after it successfully flew up and down on Monday.

But this time round, the helicopter flew to a higher altitude and then moved laterally across the Mars atmosphere, much like helicopters on Earth move.

The second flight is a relief for the Nasa team, as the aircraft was struggling with a software update which meant it missed its initial 11 April launch date.

But engineers working remotely from Earth managed to eliminate the issue and update the software that powers Ingenuity.

The second flight saw the drone ascend to a height of five meters, two more than its Monday flight, and then tilt laterally moving for two meters.

The Earth-bound team is now waiting for colour pictures of its second flight to come back from Ingenuity’s camera.

Ingenuity is the US space agency’s first attempt at a powered, controlled flight on another world.

On Monday, the Ingenuity helicopter took to the Martian skies for about 20 to 30 seconds before descending and touching back down on the Martian surface.

It will aim for up to five test flights within a 30 Martian-day (31 Earth-day) demonstration window.

Ingenuity faces the challenge of flying in the Martian atmosphere, which is about 100 times thinner than Earth’s.

About 50cm tall, the helicopter weighs 1.8kg on Earth, but is a mere 0.68kg on Mars because of the red planet’s lower gravity – roughly one third of our own.

As it is a technology demonstration, the helicopter does not have any scientific instruments onboard.

However, it does have a couple of grams of fabric from the Wright brothers’ first plane – called the Flyer – attached to it as a good luck charm.

‘Ingenuity is a technology experiment. As such, our plan is to push the envelope and learn by doing. We take risks that other missions cannot, weighing each step carefully,’ said MiMi Aung, Ingenuity’s project manager at Nasa’s Jet Propulsion Laboratory (JPL).

‘We’ll be learning all along the way, and it will be the ultimate reward for our team to be able to add another dimension to the way we explore other worlds in the future.’

According to Nasa, one of Ingenuity’s key objectives is to survive the ‘bone-chilling temperatures’ of the red planet, with ‘nights as cold as minus 90C’.

Ingenuity arrived at the Jezero Crater on February 18 after an eight-month journey spanning nearly 300 million miles, tucked inside the belly of Nasa’s Perseverance rover. 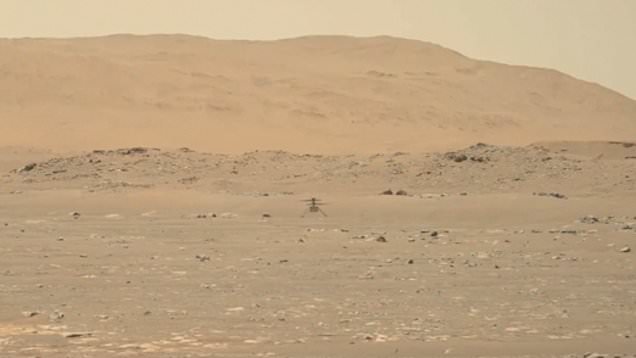 It is designed to be mostly autonomous so Nasa will not be able to control the helicopter remotely.

Nasa said it will not be able to look at engineering data or images from each flight until well after the flight takes place.

Bob Balaram, Mars Helicopter chief engineer at JPL, said: ‘Every step we have taken since this journey began six years ago has been uncharted territory in the history of aircraft.’

MORE : SpaceX wins lucrative Nasa contract to put a woman on the moon

Warehouse worker robot can shift up to 800 crates per hour

AUSTIN, Texas — President Donald Trump thanked farmers Sunday for supporting him through a trade war with China as he

For several years now, Congress and regulatory agencies have warned that they could, in the future, try to break up

Money Moves to Make in Key Decades of Your Life