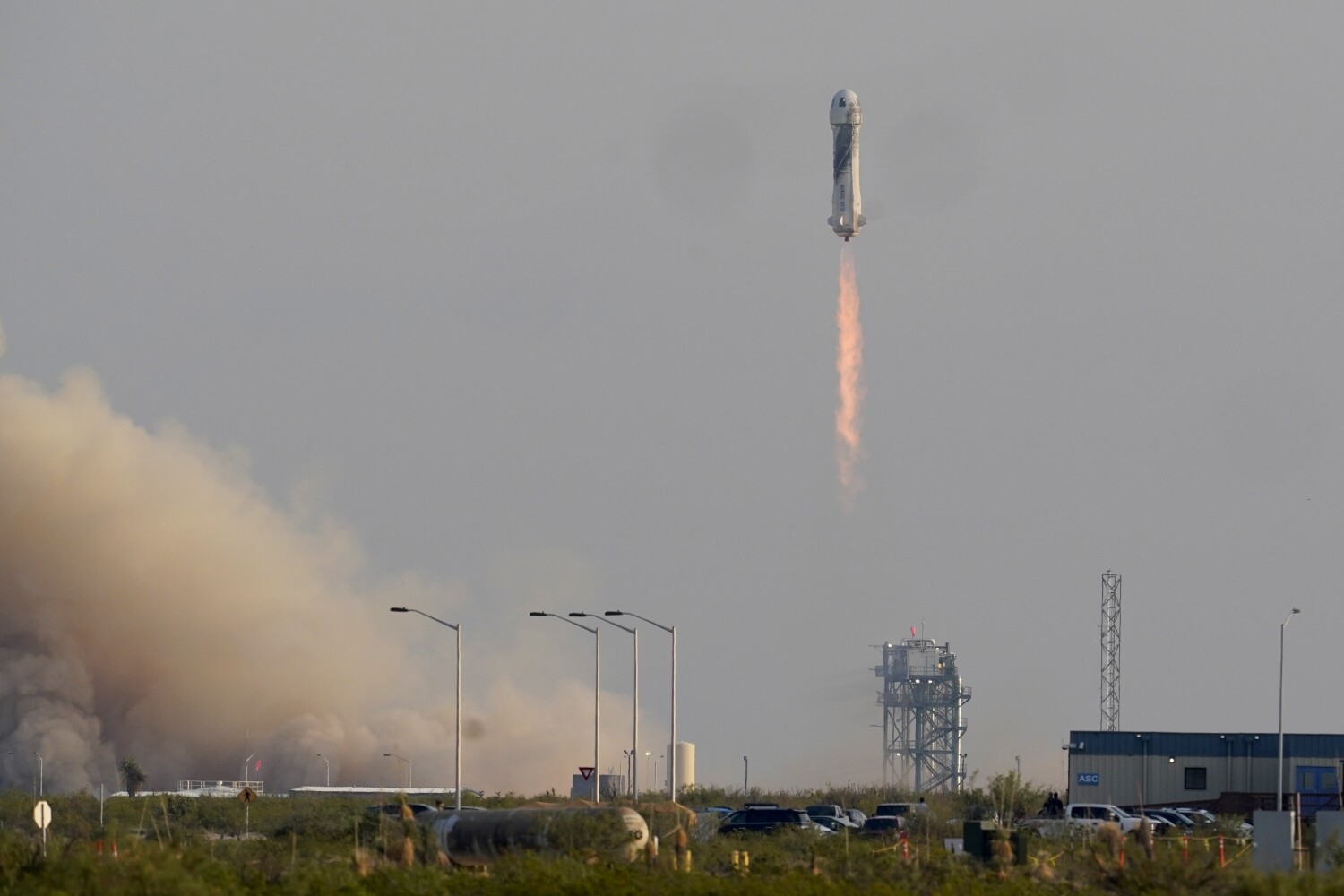 The New Shepard rocket rumbled to life early Tuesday, catapulting Amazon.com founder Jeff Bezos and three others to the edge of space and allowing the world’s richest person to achieve a childhood dream.

Back on Earth, spaceflight enthusiasts saw the brief voyage as the realization of decades of promise — the beginning of a new era for space tourism.

“Space tourism is finally here,” said Alan Ladwig, author of the book “See You in Orbit? Our Dream of Spaceflight.” “It’s still going to be expensive, it’s still not going to be something everybody can do right away, but it’s a first step.”

Bezos’ suborbital flight — his company Blue Origin’s first crewed launch — came a little over a week after British billionaire Richard Branson along with five others boarded a space plane built by his Virgin Galactic firm and flew to the edge of space and back, making it there ahead of Bezos, who had announced his plans earlier. Virgin Galactic plans to complete two more test flights before it begins flying paying customers to space next year.

Although Blue Origin flew its first paying customer on Tuesday’s flight — 18-year-old Oliver Daemen, the son of a Dutch private equity executive and now the youngest person to go to space — it has yet to announce seat prices or additional details about its commercial operations. During a livestream of Tuesday’s launch, Ariane Cornell, Blue Origin’s director of astronaut sales, repeatedly encouraged interested customers to email the company.

Already the company is approaching $100 million in private sales, Bezos told an assembled audience of guests, employees and reporters after the launch.

An auction for a seat on Tuesday’s flight ended with a winning bid of $28 million, but the ticket holder, whose identity has not been disclosed, postponed the trip, citing scheduling conflicts, according to Blue Origin. They will fly on a future mission. (Proceeds from the auction for a spot on Tuesday’s launch went to the Club for the Future foundation, which was founded by Blue Origin and is aimed at promoting science, technology, engineering and math careers. From those proceeds, 19 nonprofit organizations were selected to receive $1-million grants.)

But suborbital flights aren’t the company’s only goal; Blue Origin plans to build a family of larger rockets that could hoist cargo, satellites and people to orbit and beyond, eventually creating an ecosystem to allow millions of people to live and work in space. Bezos has previously suggested building cylindrical habitats with artificial gravity known as O’Neill colonies, after the physicist Gerard K. O’Neill, who pioneered the idea.

“Big things start small,” Bezos said Tuesday. “We’re going to build a road to space so that our kids and their kids can build the future.”

The seeming arrival of the era of suborbital space tourism after years of hype has fueled public debate around the increasing commercialization of space and the role that billionaires play in the industry.

After his flight, Bezos thanked Amazon employees and customers, saying, “You guys paid for all this.” He has previously said he has sold about $1 billion of Amazon stock a year to fund Blue Origin.

The high current price tag for spaceflight — Virgin Galactic charges as much as $250,000 per ticket — reflects the pattern of technological advancements in other fields, such as cellphones and air travel, said Timiebi Aganaba, an assistant professor at Arizona State University’s School for the Future of Innovation in Society.

“If we look back at history … it’s always started off with the people with the most resources that take the first risk,” she said. “We should celebrate the innovations that have happened and continue the conversations about how we can bring society along so that it’s not just a joyride for the rich.”

The market for commercial suborbital spaceflight could include not just wealthy individuals but also research entities, governments and even NASA, said Laura Forczyk, owner of space consulting firm Astralytical. NASA is already a major customer for Elon Musk’s SpaceX, which ferries supplies and astronauts to the International Space Station.

“What we’re seeing now is the emergence,” she said. “We do not know yet how quickly this industry is going to mature.”

Unlike other fields of research in which scientists studying environments such as a volcano or the ocean can perform their experiments in person, space researchers have had to automate their experiments so that they can be carried out remotely. That costs money and time and sometimes results in failures, said Stern, who has also spoken with Blue Origin about his interest in conducting experiments aboard New Shepard. Stern previously served as a consultant for Blue Origin and Virgin Galactic.

Regular and relatively inexpensive suborbital spaceflights would mean he could complete research projects and advance the field more rapidly.

He described Tuesday’s launch as a “watershed moment,” not because Bezos flew to suborbital space but because it indicated that there would be two commercial suborbital spaceflight companies ready for business. The competition could “start returning results for research for education and, frankly, just flying a greater cross section of people.”

Before the launch, about 100 reporters were gathered at the press site. Inns and hotels in the small town of Van Horn were sold out.

“My expectations were high, and they were dramatically exceeded,” Bezos said after his return.

He said the most profound part of the trip was seeing Earth’s atmosphere and how delicate it is — an epiphany experienced by many astronauts and known as the overview effect.

“As we move about the planet, we damage it,” Bezos said. “It’s one thing to recognize that intellectually; it’s another thing to see it with your own eyes how fragile it is.”

The New Shepard rocket booster separated from the crew capsule about two minutes after liftoff and returned to Earth minutes ahead of the capsule. Its return created a sonic boom that could be heard across the Guadalupe Mountains.

The capsule held Bezos, his brother Mark, customer Daemen and aviation pioneer Wally Funk. Audio from the launch livestream captured the capsule’s occupants cheering and reminding one another to look out the windows. They experienced about four minutes of weightlessness and were able to move about the capsule before strapping back into their seats for the return to the west Texas desert.

The craft landed back on Earth about 10 minutes after liftoff, buoyed by a trio of parachutes.

Bezos gave a thumbs up from his seat in the capsule shortly after landing. The crew emerged from the craft minutes later and was greeted by loved ones as well as a camera crew. To celebrate, they popped bottles of Champagne.

Back at the press site, about two miles from the launch tower, Blue Origin employees cried and cheered as the capsule’s parachutes deployed and when they saw Funk — at age 82, the oldest person to go to space — emerge from the capsule, arms outstretched in triumph.

Funk was part of a privately funded program called the First Lady Astronaut Trainees, also known as the Mercury 13, a group of U.S. female pilots who underwent the same physiological and psychological screening tests as NASA’s original Project Mercury astronauts but never went to space.

“I’ve been waiting a long time,” she said after the launch. “I want to go again.”

Mendez reported from Van Horn and Masunaga from Los Angeles.

Facebook cracked down for the Chauvin verdict. Why not always?