It is ‘completely unethical’ for rich nations to vaccinate their healthy young people against Covid-19 if it comes at the expense of those most at risk in poorer countries, Greta Thunberg has said.

The 18-year-old environmental campaigner said the international community faces a ‘moral test’ over the equitable distribution of coronavirus jabs and hit out at ‘vaccine nationalism’.

Speaking at a World Health Organisation (WHO) press conference on Monday, she said: ‘When we talk about countries like, for example, the UK and the US… that they are mass vaccinating large groups of their populations, even healthy and young people, that we see it from a different perspective.

‘That we don’t only see it from our Western, privileged point of view, but rather that we think globally. We need to prioritise those most vulnerable first.’ 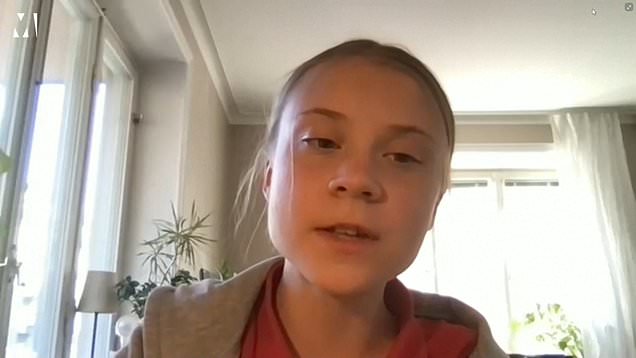 Ms Thunberg is using her own foundation to donate 100,000 euros (£86,000) to the WHO Foundation’s efforts to ensure equitable access to Covid-19 jabs for those most at risk in all countries.

The money from the Greta Thunberg Foundation will go towards Covax, the UN-sponsored programme to distribute vaccines to poorer parts of the world.

Ms Thunberg said: ‘So far on average one in four people in high income countries have received coronavirus vaccine, compared with just one in over 500 in lower and middle income countries.’

The Swedish teenager added: ‘The international community, governments and vaccine developers must step up their game and address the tragedy that is vaccine inequity.

‘We have the tools we need to correct this great imbalance that exists around the world today in the fight against Covid-19.

‘Just (as) with the climate crisis, those who are most vulnerable need to be prioritised and global problems require global solutions.

‘It is completely unethical that high-income countries are now vaccinating young and healthy people if that happens at the expense of people in risk groups and on the front lines in lower and middle-income countries.

‘And this is a moral test. We talk today about showing solidarity and yet vaccine nationalism is what’s running the vaccine distribution.

‘It is only when it really comes down to it that we show our true face.’

Ms Thunberg was asked by a journalist if she would advocate the idea of younger people in rich countries going on a ‘vaccine strike’ until their governments started sharing more vaccines.

She said the problem needed to be addressed by the international community, governments and the vaccine developers.

‘If we should start focusing on individuals and urging individuals to not take the vaccine that would send a very wrong message,’ she added.

‘Of course everyone who is offered a vaccine should take it,’ she said, adding: ‘I would not advocate for people to not take the vaccine.’

Ms Thunberg, who started the School Strike for Climate movement, also said the global health crisis cannot be separated from the ecological crisis.

She said: ‘Science shows that in the future we will most likely experience more frequent and more devastating pandemics unless we drastically change our ways and the way we treat nature.

‘Today up to 75% of all emerging diseases come from animals, and as we are cutting down forests and destroying habitats we are creating the ideal conditions for diseases to spill over from one animal to another and then to us.

How to Score Google Forms Questions That Have Multiple Correct Responses

WeWork joins SPAC trend to go public, over a year after failed IPO