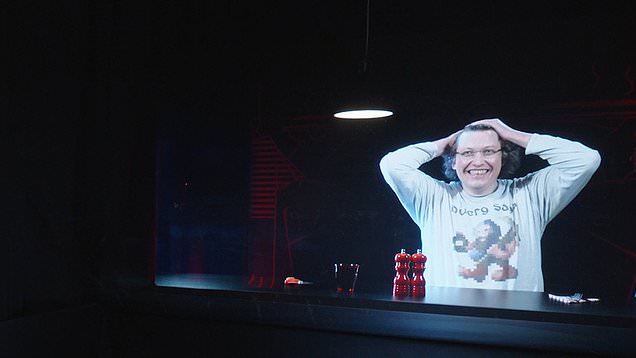 Families and friends separated by 400 miles have been reunited via hologram to share a meal together.

Virgin Media has opened a pair of dining pods for two days, one located in London and the other in Edinburgh, allowing people to eat together as though they are sat in the same room.

Life-sized 4K-quality holograms are projected on each end, using an array of cameras and lights arranged in a 360-degree cube.

The idea is to demonstrate how people could connect with others from afar in years to come, as broadband speeds improve and holograph-enabling gadgets eventually become more widely available.

Thursday and Friday’s Two Hearts Pizzeria experience is being geared towards those unable to physically visit each other during the ongoing coronavirus pandemic.

More than 30 people were selected to take part after applying earlier this year, which include a pair of 67-year-old identical twins who have been kept apart, shielding families who been unable to meet new members of the family, and an NHS doctor and her parents.

Gareth Lister, Virgin Media’s director of connectivity, said the network infrastructure is ready for such uses, as the gigabit rollout continues.

‘The capability is there from a connectivity perspective, it’s going to be the products that sit on the end of it, and then the price of them, that will be what ultimately drives take-up, but a situation like Covid will accelerate it,’ Mr Lister said.

Futurologist and tech forecaster James Bellini predicts that hologram technology will become commonplace in homes by 2030.

‘Advancements in technology and lightning-speed broadband mean that pioneering forms of connectivity, such as holograms, are now viable options for when we want to feel closer to those we’re not physically able to be with,’ he said.

‘With technology moving as quickly as it is now, it wouldn’t be strange for holograms to be commonplace in UK households by the turn of the decade.’


MORE : Brian Cox shares scientific theory that ‘we might be holograms’ and This Morning viewers are baffled

MORE : A history of dead celebrity holograms as Kanye West gifts Kim Kardashian with projection of her late dad

SafeMoon: Price, how to buy coins, and is the cryptocurrency worth it?

Battle of the Androids: Which smartphone is best for you?

The best robot vacuum for 2021