Outriders has a fairly meaty campaign, one that’ll take you roughly 10-12 hours to finish. When you’re done, though, you’ll be able to undertake Expeditions. This is basically the endgame loop for this looter shooter. Anyway, here’s our guide to help you with Expeditions, the endgame activity for Outriders.

After the ending cutscene, you’ll find yourself on a grassy meadow with your character’s pals. From here, you’ll be able to start Outriders‘ endgame Expeditions. By default, only three are available, but more will be unlocked as you complete your runs.

Note: There are 15 Expeditions in total. 14 of these are part of a rotation and the fifteenth, the Eye of the Storm, can be unlocked later. 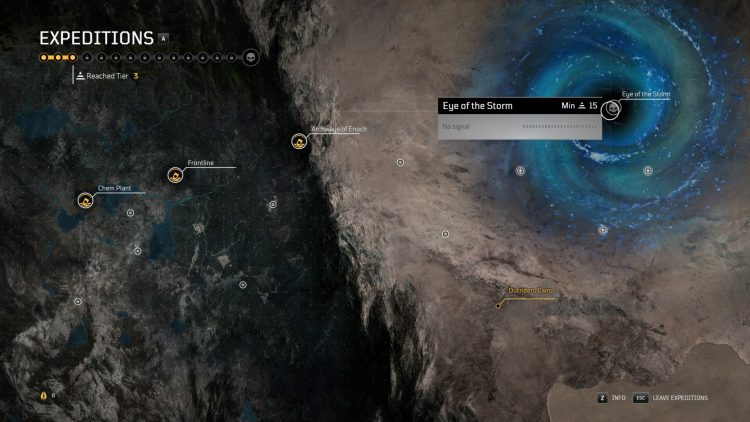 How do Expeditions work?

Each Expedition in Outriders has several tiers and timer-based rewards:

Note: Your current World Tier in Outriders has no bearing at all when it comes to Expeditions. But, this feature will be very important with regards to preparations. 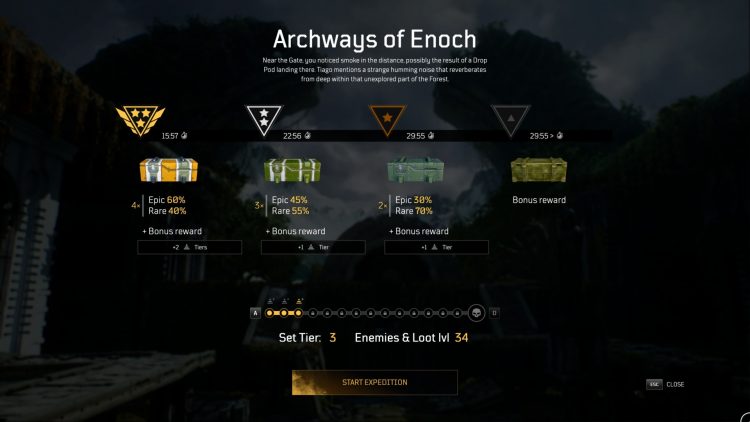 When you’re done with an Expedition, you’ll obtain Drop Pod Resources. This currency can be used to buy items from Tiago in your camp. Unlike other vendors in Outriders, Tiago will only accept Drop Pod Resources, but he does sell epic and legendary items.

Under the “Elite Offer” tab, you’ll find at least four legendary armor pieces for your current class, as well as four legendary weapons. These have ridiculously high costs (one piece of legendary item alone costs 3,616 Drop Pod Resources). As such, you can expect that you’ll be farming solo or with buddies to amass the currency. 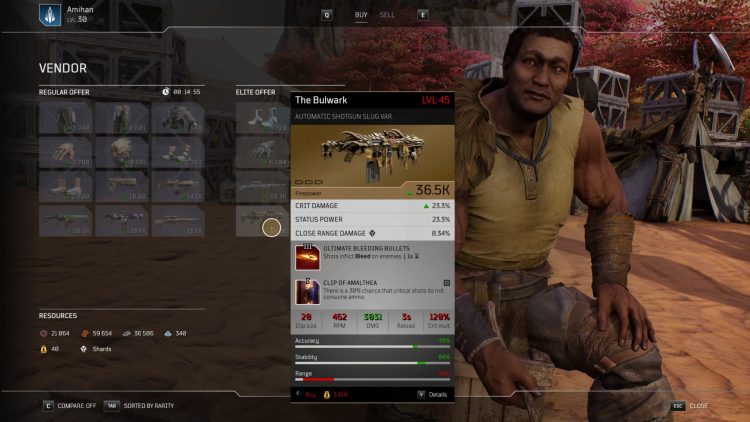 Okay, but what exactly can we expect once we start the activity itself?

Think of Expeditions as self-contained missions or, if you’ve played Destiny, then these are akin to mini-strikes. The activity will usually have a couple of areas, a particular objective for that section, and lots of enemies. An example I’ll discuss in detail is the Archways of Enoch Expedition in Outriders. The enemies here are all Perforo-type creatures and there are three sections.

Note 1: Since mobs here tend to be clustered, I would suggest using an automatic shotgun with awesome mods like “Bone Shrapnel” (killing shots detonate enemies and cause bleed) and/or “Minefield” (killing shots spawn explosives around the dead target).

Note 2: Enemies in Expeditions only drop ammo, not loot. You’ll get your loot once you open the drop pod at the end of your run. 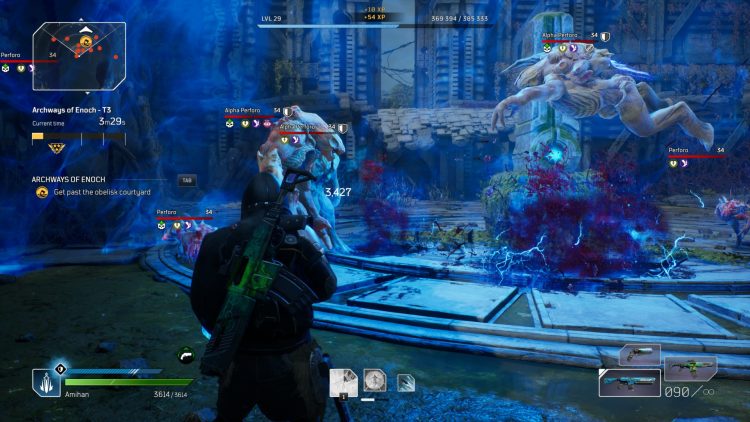 First section – Several waves of mobs will spawn, including dozens of maulers and at least one brood queen.

Second section – You’ll need to stand within a pillar’s aura until it finishes charging. Five waves of mobs will spawn here and you’ll need to eliminate and prevent them from going inside the aura (it stops the charging process). You’ll encounter maulers, venomous perforo, alpha perforo, and a brood queen. 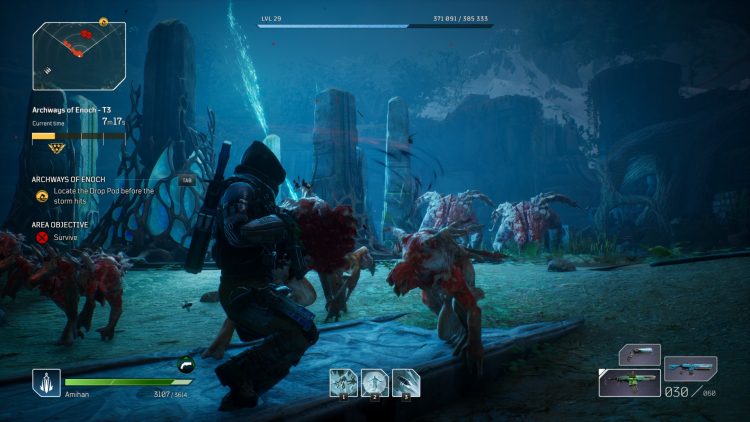 Third section – This one takes place in a large plaza with a glowing structure in the middle. You can run around and take out the hostiles. There are lots of alpha perforo and venomous perforo here. Likewise, the encounter starts with two behemoths already spawned (you’ll want to pop your cooldowns to blast them immediately). Later, a couple of brood queens will also appear. Still, the biggest threats here, in my opinion, are the strix. The flying wasps lob poison orbs at you with deadly accuracy. They can be very annoying to shoot especially when you’re running away from half a dozen hostiles.

After clearing the third section, you’ll receive your rewards depending on how long it took you to finish your run. You’ll also obtain some Drop Pod Resources. Anyway, I cleared tier 3 of this Expedition while getting the “gold” timer-based rewards. It provided me with a couple of bonus tiers. Because of this result, I could now select new Expeditions and go up to tier 5. 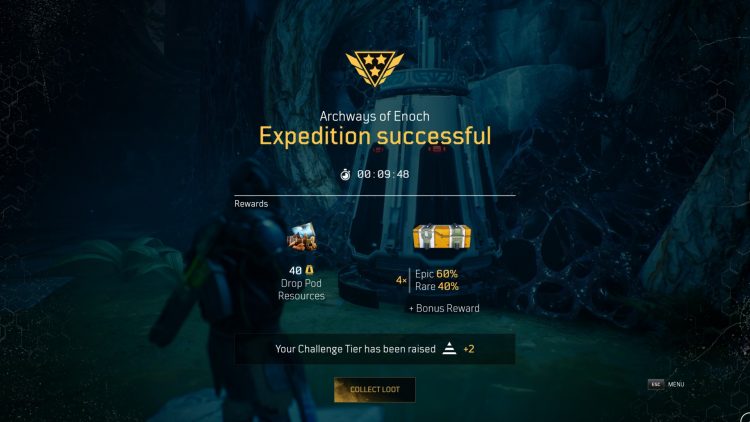 Enemies are brutal on higher tiers. What do I do?

The thing is, the items you gathered while doing Outriders’ campaign are all dependent on your character’s level and World Tier. Let’s say you fought the final boss while your character was level 29 and at World Tier 6 (+3 enemy/dropped item level). That means the loot you’ll obtain will be around level 32 only.

If you bring your current equipment to an Expedition and boost the Expedition’s tier (i.e., level 37 enemies), you could find yourself outmatched and undergeared. If this is the case, you have a few options:

Okay, so what’s the Eye of the Storm?

Eventually, you’ll reach the +15 tier to unlock Outriders‘ Eye of the Storm Expedition. This one’s fairly difficult (with lots of high-level enemies). In the end, you’ll face the final boss (who has a few tricks up his sleeve).

I won’t spoil it, but you can watch the “world’s first completion” video below from YouTuber ImPwnStar:

Nier Replicant PS5 Share Tweets Are Being Blocked by Sony