CVC Capital Partners is weighing a $20bn bid for a majority stake in Toshiba that could take the Japanese industrial group private and remove activist investors from its shareholder registry, according to two people with knowledge of the talks.

The deal, which would rank among the 20 largest leveraged buyouts in history, would mark yet another twist in a corporate saga that has taken Toshiba from a profit-padding scandal in 2015 and the edge of bankruptcy two years later to a humiliating defeat in a showdown with its largest shareholders last month.

CVC is expected to partner with other investment funds to finance the deal, which was first reported by Nikkei Asia. The Luxembourg-based buyout group declined to comment.

In a statement on Wednesday, Toshiba said it would carefully study an initial proposal it received from CVC a day earlier.

The removal of the 145-year-old Toshiba from the Tokyo Stock Exchange in a foreign-led deal would be a hugely symbolic move, said advisers directly involved with the conglomerate, after years of increased activism and acquisitions by overseas funds. US private equity firms such as Bain and KKR view Japan as one of the most target-rich markets in the world.

But Toshiba has been especially vulnerable. The company’s protracted financial crisis, which stemmed from the collapse of its US nuclear business in 2017, was temporarily solved when the company engaged Goldman Sachs to run an emergency issuance of $5.3bn of equity.

Although the deal was completed quickly, it left Toshiba’s shareholder register heavily populated with foreign activist funds — groups that may see the opportunity for a lucrative exit if the CVC deal is completed at a large premium.

Activist investors in Toshiba include the secretive Singapore-based fund Effissimo, which is the group’s largest shareholder and has led the pressure on Nobuaki Kurumatani, the chief executive who was hired in 2018 to turn the company round.

In the three years since his appointment, Kurumatani has clashed repeatedly with shareholders. At an extraordinary general meeting last month, Toshiba’s management suffered an embarrassing defeat after shareholders voted in favour of Effissimo’s proposal for an investigation into the company’s conduct during last year’s annual general meeting.

A bid by a non-Japanese private equity fund would require approval from the Japanese government and a takeover of Toshiba would be particularly sensitive because it operates the country’s nuclear plants.

CVC, however, is not a stranger to Toshiba. Kurumatani, a former banker, was president of the European fund’s Japanese arm before taking over as Toshiba’s chief executive. Yoshiaki Fujimori, a senior executive adviser to CVC in Japan, is also a member of the Japanese group’s board.

The deal would be one of the largest leveraged buyouts since the 2008 financial crisis, on the same scale as the €17.2bn acquisition of Thyssenkrupp’s lifts business by Advent International and Cinven last year, according to Refinitiv. 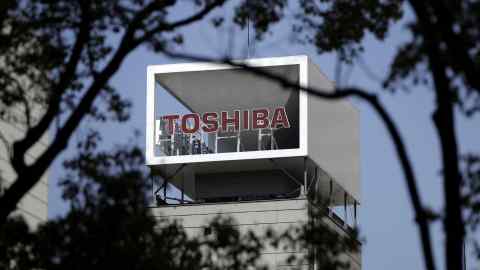 CVC raised a €21bn fund last year for deals in Europe and the Americas, and a separate $4.3bn Asian fund, according to its website.

But buying Toshiba would mark a departure from the company’s usual style of dealmaking in the region, in which it typically buys groups that are valued between $250m and $1.5bn, its site said. In February, it bought a majority stake in Shiseido’s personal care business.

CVC’s recent deals included a £365m stake in the Six Nations rugby tournament and stakes in two UK-based companies whose software is behind the NHS coronavirus vaccine rollout.

Several private equity firms have previously mulled a bid for Toshiba, calculating that if they broke the company up, the sum of its parts may be greater than its current valuation, one adviser to the industry said. However, the adviser added, the size and complexity of the deal had previously made it difficult to pull off.

FT premium subscribers can click here to receive Due Diligence every day by email.

NatWest to refuse to business customers who accept Bitcoin & cryptocurrencies

Marks & Spencer to step up store closures after £200m loss